The Empire Recycling Family of Companies is partnering with Keeler in the Morning and WIBX to bring relief to areas ravaged by Hurricane Dorian.  The supply drive will take place Thursday, September 12, 2019 from 6:00 am to 7:00 pm in the parking lot of Hannaford Supermarket, 4593 Commercial Drive, New Hartford. First News With Keeler on WIBX will broadcast live from Hannaford’s on Commercial Drive from 6am-9am on Thursday.

Donations may be brought directly to the ERL Intermodal supply drive truck located in the Hannaford parking lot.  Items will be shipped and distributed to the areas most effected by Hurricane Dorian, including the Bahamas.

“The devastation that was left in Hurricane Dorian’s path is unimaginable,” said Steven Kowalsky, president of Empire Recycling Corporation.  “With one of our companies specializing in intermodal shipping, we knew we had the ability to ship donations to those in desperate need.  And working together with the generosity of our community, we will be bringing relief to the areas that need it the most.”

“This is an amazing community when it comes to giving,” said WIBX’s Keeler. “There are people that are suffering from the Bahamas to the Carolinas and these supplies will be shipped directly to the people in need.”

If not, please watch this video of one of our trucks getting hit by ice that flew off the top of a minivan on the NYS Thruway. The ice shattered the windshield and had our driver not acted calmly, the outcome could have been tragically different. We're proud of our driver for keeping his composure while safely pulling his 40-ton load to the side of the thruway.

See the video by clicking here. 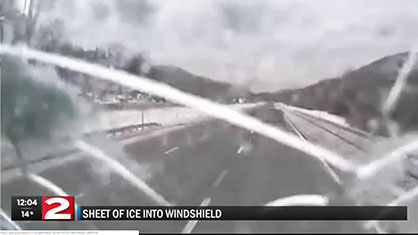 Weeks of planning and three days of interviews and footage went into making the testimonial spot, featuring ERL Intermodal's fleet of trucks, showcasing International's A26 engine and LT series trucks.

"We're proud of our fleet of trucks," said Steve Sperbeck, general manager for ERL Intermodal.  "Someone from International Trucks noticed a comment I made on social media about the success we're having with our fleet of International trucks, so they reached out to us and asked if we'd like to be a part of this testimonial campaign.  We were excited to participate and showcase our company to an International audience!  It was also a great opportunity to kick off our new name, our great staff, and the Utica-area."

Weeks of planning went into making this video happen, from the Chicago-based film agency that traveled to Utica with a team of 5 people, to coordinating efforts within ERL's office, assuring that business was still running smoothly while filming was taking place.  ERL, the agency, and the City of Utica even coordinated short-term road closures with rolling roadblocks (police escorts) to allow for filming of the tandem truck down Route 5s.  Footage was taken on land, from the back of a pick up truck outfitted with film equipment, and by drone capable of flying up to 5-miles to capture footage.

"We didn't know what to expect when we agreed to participate," said Sperbeck.  "It was a much larger production than we even anticipated, but it could not have gone any better... the film crew was incredibly professional and very conscious of the fact that we were still open for business during filming.  It was very exciting for our company and for our area, and I know our staff is proud of the final video and proud of their International truck."

See the video by clicking here, or clicking play on the video to the left. 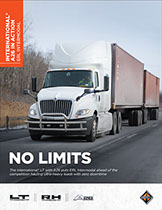 Click here to view our testimonial for the International A26."

A rose by any other name would smell as sweet. — William Shakespeare

UTICA — In Shakespeare’s play “Romeo and Juliet,” the heroine argues that Romeo’s last name shouldn’t be an impediment to their marriage. After all, what difference does a name make?

All the difference in the world if you ask the principals at the former Empire Recycling Logistics Corp. “When our potential customers heard or saw our name, they couldn’t get past the word ‘recycling’,” asserts Steven R. Kowalsky, the president of the enterprise’s holding company — Empire Recycling Corp. “One of our businesses is in intermodal freight, hauling containers by truck to and from ports in the Greater New York–New Jersey metro area. The original name was definitely a hindrance to our growth.”

International Trucks is producing a commercial for a new product line, and they’re utilizing local Utica business. The commercial shoot could have been a difficult task, but getting the local permits and shutting down a number of roads was easy with the help of Utica’s Commissioner of Film, Paul Buckley.

"You know being in the position I have at City Hall, I know the UPD, I know the DOT, I know everybody that has to get… they want something done I know exactly who to go to, and they’re willing to work for me, they’re willing to get things done, and make it a memorable visit here to Utica, so it’s very easy to get things done here production wise."

The production crew kept road closures to a minimum with the help of the Utica Police. In addition to braving the cold temperatures in the back
of a truck, drone video was utilized for a different look. Getting a commercial like this shot can be a logistical nightmare, but Engineworks Films Director Sean Costin had this to say about Utica.

Empire Recycling Logistics Intermodal is a small company with only 45 employees, but ERL Intermodal General Manager Steve Sperbeck thinks they were chosen because of their enthusiasm.

"It’s exciting for our little company. We’re in growth mode. We’re probably one of the faster growing trucking companies in the region. International Trucks is a world-wide brand and I’m proud that they picked us."

The commercial is expected to be completed by the end of March and can be seen on International Trucks website.

Steve Sperbeck, General Manager of ERL Intermodal, appeared on the Bill Keeler Show (WIBX 950AM) to discuss the filming of a national ad campaign to take place January 30 and 31, 2018.  The ad campaign will feature ERL Intermodal's fleet of International Trucks.

Click here to listen to the audio of the show - https://youtu.be/7Ef552W3yBU

The Empire Recycling Family of Companies

Metals to paper, steel to transportation - we are here for you!